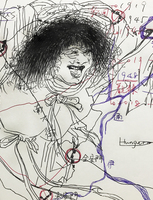 In 1996 in northwest China, a 13-year-old called Zhang Koukou watched his mother die after her fight with a neighbor turned violent. Twenty-two years later, Zhang brutally murdered his mother’s killer, along with the man’s brother and elderly father. The disturbing case captured the imagination of Beijing-based artist Wang Tuo, whose film Smoke and Fire (2018) ominously interweaves a migrant worker’s homecoming and his theatrical enactments of Chinese stories about duty, vengeance, and supernatural encounters. The work is the first of a tetralogy probing the spiritual…