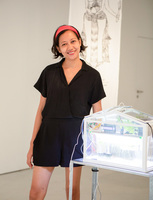 Born in Yogyakarta in 1976, Irene Agrivina experienced firsthand the seismic social and political shifts that unfolded across Indonesia following the end of Suharto’s 31-year autocratic rule in 1998. Among the Reformasi period’s most significant changes was the easing of restrictions on freedom of speech, which coincided with the development of the internet. The unbridled flow of information expanded the worlds of many Indonesians and allowed them to access a…