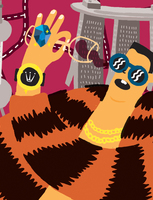 A bestselling novel revels in, and reveals,
the lives and consumption habits of Asia's superwealthy