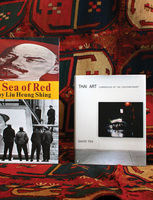 A Life in a Sea of Red

A cyclist takes a puff from his cigarette, his bike parked next to him on Beijing’s Tiananmen Square. He appears to be relaxed, though he gazes into the distance with furrowed brows. This image, taken in 1982 by photojournalist Liu Heung Shing, captures a rare moment of stillness in a rapidly modernizing China, following Deng Xiaoping's economic reforms of…