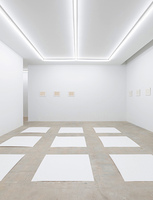 Widely considered the father of conceptual art in Japan, Yutaka Matsuzawa (1922–2006) spent most of his life attempting to formulate an impactful art practice characterized by invisibility and impermanence. According to an autobiographical account from the artist, he was born with eyes closed, and did not open them until 22 days…