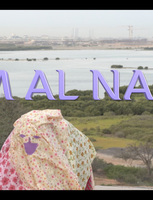 The crumbling coastal settlement of Jazirat Al Hamra is widely rumored to be haunted. In Farah Al-Qasimi’s debut film, Um Al Naar (Mother of Fire) (2019), the titular djinni is first seen wandering through the ghost town, swathed in a patchwork of floral sheets. Set in present-day United Arab Emirates, the remainder of the film plays like a reality TV segment in which…