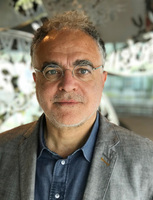 In the late 1990s and early 2000s, Beirut was undergoing a metamorphosis. Crumbling, pock-marked buildings etched with the violence of the 15-year-long Lebanese Civil War were being knocked down and replaced at a dizzying rate. A new, barely recognizable city was emerging from the reconstruction frenzy. The characters of Lebanese artist and architect Nadim Karam’s sculptural installation Archaic Procession (1997–2000) appeared amid this backdrop of flux. For over four years…