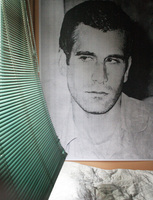 On Jean Genet and Failure

I was reading Prisoner of Love (1986), Jean Genet’s posthumous masterpiece about the years he spent with the Palestinian revolution in the 1970s and ’80s, as my flight from Berlin started its descent into Amman. The “fasten seatbelt” sign had just been switched on, but people were standing up to peer out the window. You could spot the Arabs on the plane…