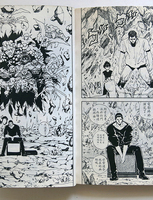 Or, how I discovered the sixth sense via television and comic books

People often ask why I decided to become an artist. Instead of saying that it was simply something that I did from an early age and never grew out of, perhaps I should be pinpointing the formative influence of Japanese anime and manga, which is something else I never fully grew out of. For most of my childhood…