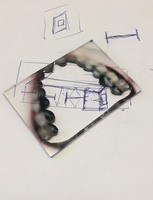 The Secrets of Sound

What can sound itself—unmoored from its source or from discourse—tell us about the context in which it arose? A lot, according to self-described “private ear” Lawrence Abu Hamdan. In the “Disputed Utterance” (2018–19) series, which is sketched out in the above image, the artist photographed the wide-open maws of individuals after he asked them to pronounce certain words. Each vocalization left a phonemic imprint on the tongues and palates, which had been stained with charcoal. These exercises reference real-life cases where evidence of potential…