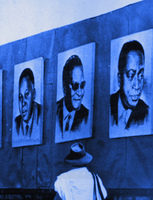 “Xenogenesis” at Eindhoven’s Van Abbemuseum comprised ten works created between 2011 and 2018 by the Otolith Group, spearheaded by Kodwo Eshun and Anjalika Sagar. Arranging the works in a nonchronological order, the artists were careful not to position the show as a retrospective, but rather as a cross-section of their practice, framed by…