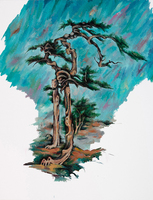 “In the Studio,” Zeng Fanzhi’s first exhibition since signing with Hauser & Wirth in March 2018, was billed as a single show mounted across three of the gallery’s worldwide locations. Through concurrently presenting works of different styles, genres and media—some of which were produced in the same year—Zeng declared his refusal to be pinned down…