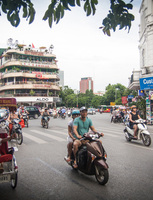 BY DO TUONG LINH

For better or for worse

Hanoi prides itself on its 1,000-year history and diverse mix of Chinese, French and Soviet cultural influences. It is much like a living theater, with all aspects of life played out in the streets, including eating, drinking, talking, singing, driving, dancing and fighting.