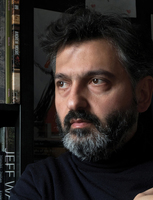 As a young boy in 1970s Damascus, Hrair Sarkissian was often found in his father’s photography shop—the first of its kind in Syria—secretly playing with the equipment. When he was a little older, in the ’80s, he would take cameras from his father’s studio and travel by bus around Syria, snapping pictures along the way. In those early years, photography was the father’s trade and the son’s hobby.

Sarkissian’s artistic “revolution,” as he calls it, took…