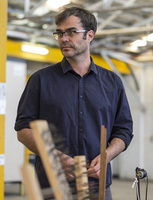 A mysterious choir of metallic sounds often emanates from a defunct paint factory in suburban Brisbane. I heard these sounds myself one April morning as I walked toward Ross Manning’s warehouse studio in this factory, which also houses some of Queensland’s best-known artists, such as Judy Watson, Gordon Hookey, Sandra Selig, Eugene Carchesio, Dale Harding and Richard Bell. The discordant music was coming from one of the many large kinetic instruments that the artist…