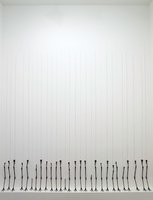 Standing in the cavernous, brightly lit interior of London's Blain|Southern in early February, one was reminded of the whitewashed, futuristic rooms used in sci-fi films to denote some sort of alternate zone outside of the space-time continuum. Think "The Construct" in The Matrix (1999) or the Stargate sequence in 2001: A Space Odyssey (1968). At Blain|Southern, the all-pervading whiteness was strangely awe-inspiring—appearing half laboratory, half art gallery. A series of small, dark canvases…