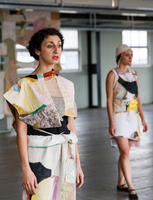 The future is already here – It's just not evenly distributed

There's a moment in Alexis Teplin's three-character play Arch (The Politics of Fragmentation) (2016) when one of the actors, wearing a costume fashioned of painted rags, drolly intones: "Some very precarious patterns of civilization are going to dissolve, which is why all of the time I feel…