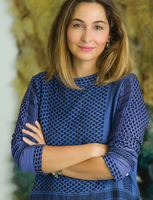 During the dinner feting Abraaj Group Art Prize winners Basel Abbas and Ruanne Abou-Rahme at her beachfront home in Dubai during the city's Art Week in March, collector and patron Dana Farouki seemed confounded. Her mother, a doyenne of well-heeled Washington, DC, society, was vocally displeased that her daughter would serve shawarma sandwiches without plates. While such mother-daughter divergence over hostessing techniques was gently comical, the incident foregrounds how Farouki has navigated her role as an art-world power player—through trusteeships and…