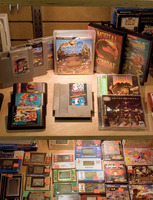 One of China’s first new-media artists, Feng Mengbo was included in both documenta 10 in 1997 and documenta 11 in 2002, where he exhibited Q4U (2000-02), a customized version of the first-person shooting game Quake III. It comes as no surprise then that Feng is a connoisseur of video games. In this new column, ArtAsiaPacific invited the Beijing-based artist to nominate his eight favorite games.