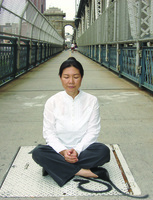 Although Kimsooja (see AAP VOL. 3, NO. 3; 37, 38, 51) began her artistic practice in Korea in the 1980s, it was not until the early 1990s that the rest of the world started paying attention to her work. During a residency at PS 1 in 1992-93, Kimsooja began to shift away from making the elaborate fabric constructions that had occupied her for the better part of a decade toward her signature use of bottari, bundling used clothes in brightly colored Korean…