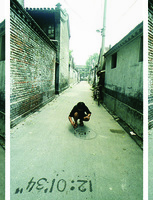 Beijing-based Song Dong (see AAP 29, 48) has been an understated but visible and thought-provoking presence on the Chinese art scene since the 1990s. Beijing Commune’s recent retrospective exhibition, which took up the entire single-floor gallery, illustrated Song’s consistent exploration of ephemerality, particularly the difficulty of marking the passage of time and the fragility of the visual image.