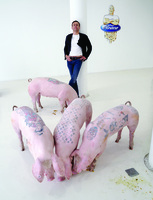 Internationally celebrated for his stained-glass soccer goalie nets, monumental steel Gothic trucks and tractors and sophisticated Cloaca digestive tract machines that turn food into excrement, Belgium-born Wim Delvoye became a part-time resident of China in 2004 when he rented a farm to tattoo pigs. Delvoye wasn’t interested in breeding hogs or raising them for meat—he is a vegetarian—but rather to use their skins to make art that literally grows. In 2005 he…