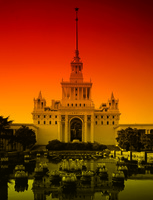 Lorenzo Rudolf is a large, stocky man who, when talking, swings between sudden animation and deliberate thoughtfulness. Originally trained as a lawyer, he made his name as director of the Art Basel art fair in the 1990s and is credited with turning a summer tradition into a yearly spectacle, broadening the fair’s focus on pre-Modern and Modern blue-chip art to include younger galleries and initiatives for showcasing cutting-edge artists. Before he left his post at Art Basel, Rudolf began…