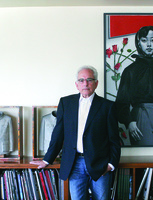 Many early collectors of Chinese Contemporary art post-1979 say that aesthetics alone cannot explain the beginnings of their passion. Predominantly Westerners, they point to expatriate postings to Hong Kong or Beijing, or study of the country while at university, as part of the catalytic mix that inspired their first buys. Which makes Howard Farber all the more intriguing.

Few outside and inside the world of contemporary Chinese art know of Farber. But his attempt—from a New York base—to…