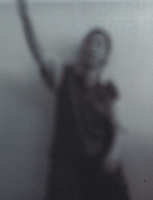 Matters Of Life And Death

In 1998 the artist Araya Rasdjarmrearnsook shifted from working with object-based installations to creating videos (SEE AAP 45). This shift developed from her performance-based work with corpses. In I'm Living (2002), the artist filmed herself dressing female corpses, pretending she was playing children's games with dolls. In Conversation with Death on Life's First Street (2005), she filmed herself lying and seated among covered corpses arranged on morgue trays…