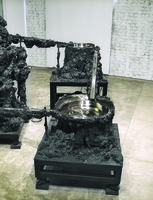 In 2002, LN Tallur created Made in England: A Temple Designed for India, a six-meter-tall, phallic-shaped inflatable Shiva temple, which placed him in the league of India’s leading sculptors. With a long red slit down the front that forms the temple entrance—suggestive of female genitalia—and a red inflatable sacred cow sitting on a black cushion facing the opening, Made in England takes a comic jab at…