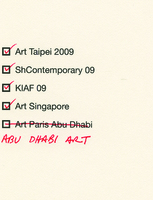 The Recession Rages On

This year in the art world the months of June, July and August—from the end of Art Basel (June 10–14) to early September—were reminiscent of the eye of a cyclone. As the storm abates momentarily, the earth grows eerily quiet in anticipation of the returning winds. Coming from the opposite direction, the storm blows harder than before. If the tempestuous period in the art market from January 2008 to June 2009 didn’t wipe out as many businesses as feared, the next phase of the recession, as…