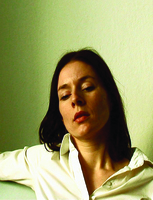 In her second solo show in the United States, “Les Ruissellements du Diable,” Berlin-based Israel-born artist Keren Cytter presented just two narrative videos. The title is translated from the Spanish, “Las Babas del Diablo” (literally, “the drooling of the devil”), after a short story by Argentine author Julio Cortázar, which is rendered in English as “Blow Up” and served as the inspiration for Michelangelo Antonioni’s 1966 film. Cytter…