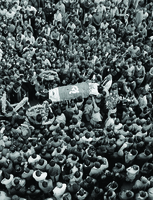 Activists use walls like polemic tracts, cramming together messages and forceful rhetoric. The Safdar Hashmi Memorial Trust (SAHMAT), a New Delhi-based artist-activist collective, is celebrating its 20th anniversary this year with a series of events, including an exhibition packed with artworks and historical objects that relate the group’s turbulent first two decades.

Activist-photographer Ram Rahman, one of the group’s founders, organized the show “Image, Music, Text,” which ran from January…