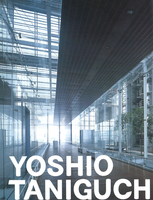 Light, water, a sense of transparency here, the presentiment of a secret about to be revealed there: these are the principal ingredients of Yoshio Taniguchi's architecture, whether he is designing a museum to house some of Japan's most precious ancient relics, as he did in Tokyo's Gallery of Horyuji Treasures, ora "museum of garbage," as he describes his Hiroshima City Naka Incineration Plant, commonly known as "the dump." Both buildings house artifacts of human history, displayed with equal respect, though preservation is the goal in…