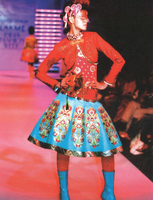 Young New Delhi based fashion designer Manish Arora's career is already as flamboyant as the clothes he creates. Chosen best Indian designer of 2005-06 by a jury of 25 fashion professionals in India, he also became the first Indian designer ever invited to participate in London Fashion Week, for its Spring/Summer 2006 festivities. His prêt label Fish Fry, launched in 2001, is retailed at Saks Fifth Avenue in New York, Harrods in London and Bon Marché in…