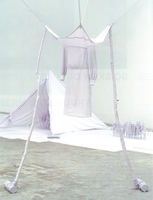 Not Your Everyday Cosmic Wonder

Magic Village is Cosmic Wonder's most recent and most ambitious collection to date. The show was unlike the typical runway extravaganzas normally seen during fashion weeks. Instead, it was a conceptual performance, first staged in late 2004 at the Palais de Tokyo and later the following year at MU Museum in Eindhoven, in the Netherlands. Lithe models posed in, around and amidst the fashion: dresses were suspended from fabric extending from the shoulders and…