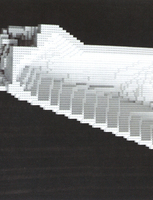 A Collaboration Between ArtAsiaPacific, Lego and Nine Leading Architects

Architecture in Asia is booming. As cities and people around the region reinvent the notion of the megalopolis, adapting to unique, local pressures and stimuli, they also express an outward interest in global trends of style and thought. However, much of the writing about this phenomenon takes a socio-critical perspective, addressing urban sprawl, population crowding, the destruction of architectural heritage and the predominance of commercial architectural forms. Few writers have discussed a generation of talented innovators whose work within this…