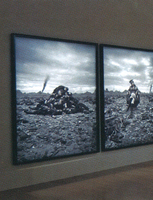 Today, all that is "global" has proliferated to the farthest edges of the earth, with critics claiming culture has become homogenized - visually, linguistically and consciously— through a new hegemony of satellite-transmitted media such as CNN, Hollywood, MTV and Coca-Cola-style ad campaigns. A formula of "truth" through global imagery looms before us all.

It follows that the second OK Video Art Festival, Sub/Version, organized by the ruangrupa artists collective, Jakarta, strategically disrupts these preconceived "truths" or "realities" that grip us…