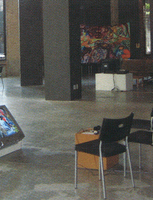 Beijing's Suojiacun artists' community is rallying to save their space from demolition. According to reports, developer Huang Zhigao first leased land from Suojiacun village for agricultural purposes but decided to develop a complex of industrial-style artists' studios in 2004. He did not obtain full legal approval for the project and in May 2005 was informed by the Chaoyang District government that his complex would be razed.

The artists were notified on June 13, three days before the scheduled demolition. They quickly organized a protest and received…