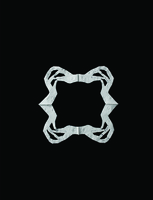 IDEAS ON A NAPKIN

For ideas on a napkin, ArtAsiaPacific invites an artist to sketch and send a fresh, quick thought. Anna Sew Hoy was born in Auckland in 1976. Presently based in Los Angeles, the artist’s assemblages and installations often exist as careful framing devices for the space they occupy. In April, nine of her recent sculptures were shown at Sikkema Jenkins & Co. in New York. Sew Hoy says that the napkin is to be called Four Hands or Eight Hands, depending on how it is unfolded.