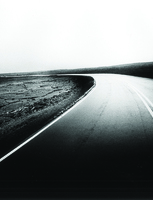 Out of the Darkness

A photographer who captured the rawness of Japan's social and political upheavals during the 1960s and 1970s turns his lens to the open expanse of a foreign landscape.

Daido Moriyama’s recent photographs of Hawaii cast a certain coldness over the tropical island. Rendered in his characteristic graininess and high-contrast tones, the series of black-and-white prints offers an uncanny, mixed portrait of the…