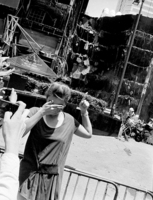 During recent political riots in Bangkok, a public sculpture proves to be a subject for meditation on art’s place in thai culture.

In May 2010, Bangkok was burning in more than three dozen places, while gun battles between government troops and guerilla-style “warriors” raged in a municipal park. The unrest had been sparked in late February…