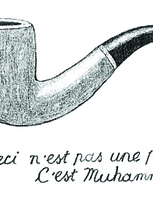 A movement to use free speech as a weapon against extremism reveals flaws on both sides of the issue.

In April, when Seattle-based cartoonist Molly Norris designated May 20, 2010, as “Everybody Draw Mohammed [sic] Day,” it was a small project conceived in reaction to a controversy surrounding the American television show South Park. On April 14, the Comedy Central network censored the cartoon, both…