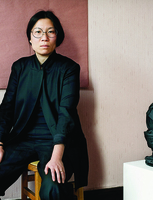 When Chosil Kil opened the door of her studio and home, on a quiet street of terraced houses in the North London neighborhood of Highbury, she was not wearing glasses. I noticed this because her owlish tortoiseshell spectacles had been sitting on a white plinth in Berlin’s Galerie Opdahl a few months earlier. The piece, entitled Glasses (2008), embodies Kil’s approach to her artmaking: displays of objects that are evidence of some prior activity or private attachment. Kil’s works prompt one…