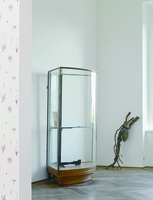 Where the Lions Are

In a 1995 interview the Cuban-American artist Felix Gonzalez-Torres discussed his spy-like approach to art-making, in which he infiltrates art’s rarefied spaces with visually pleasing but seemingly unremarkable objects that surreptitiously reference autobiographical elements and contemporary politics. A worthy heir to Gonzalez-Torres, Berlin-based Danh Vo deploys a comparably clandestine approach in “Where the Lions Are,” his spare but suggestive solo exhibition at Kunsthalle Basel.

Vo was four when his…