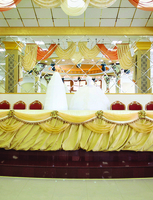 The fourth International Baku Biennale opened among the vaults and minarets of the event’s main venue, the Shirvanshah Palace, one of a few extant examples of 15th-century Islamic architecture in Azerbaijan’s capital. Housed at multiple venues around the city, including the hulking former Museum of Lenin (now the State Carpet Museum), the festival showcased works by 65 contemporary artists from Central Asia, Russia, Europe and the United States.