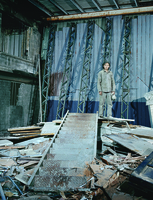 At 50 years old, Chen Chieh-jen is one of Taiwan’s leading artists, having in recent years exhibited in the Liverpool and Sydney biennials (both 2006), the Guangzhou Triennial (2008) and the Asia-Pacific Triennial (2009) in Brisbane, Australia. He works mainly in film, video and digital imagery, and he has repeatedly claimed that his work relates to issues of those marginalized by state institutions. He continues this theme with two video installations, Empire’s Borders I (2009)…