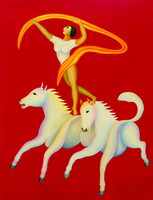 Hitting the mark in the season’s auctions

This year’s Spring auction results seem to suggest that the art market has turned a corner. The season started with the Asia Week series of sales in New York, and although the catalogs for South Asian modern and contemporary works at both Sotheby’s and Christie’s were thin compared to 2007 and 2008, the general sentiment was that the sales were solid against comparable 2009…