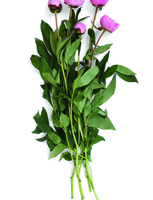 Born in 1974, Raqib Shaw is an Indian artist based in London. In his paintings, Shaw often creates vibrant, fantastical universes where epic, densely composed scenes are populated by a multitude of flora, fauna and anthropomorphic creatures. In 2009, the series “Absence of God” (2007–08), featuring seven paintings and an installation, was shown at White Cube, London. Shaw offered ArtAsiaPacific eight of his favorite flowers, which serve as inspiration for his phantasmagorical paintings.