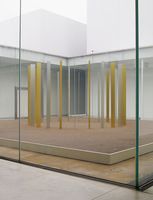 Often associated with the American Minimalist movement of the 1950s and 1960s, Tadaaki Kuwayama was a close colleague of artists such as Dan Flavin and Donald Judd, whom he began to associate with after moving to New York from his native Nagoya in 1958. After showing his work in the early 1960s at New York’s Green Gallery—an important early…