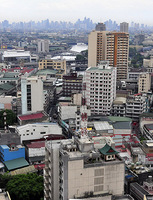 There is a saying in Southeast Asian history: “the sea unites and the land divides”—referring to how navigable oceans facilitated maritime interaction,
while dense forests inhibited land travel.

For the Philippines, an archipelago of over 7,000 islands that has been both a Spanish and a United States colony, this means that its cultural heritage developed facing outward and in interaction with influences from elsewhere. But the nation also possesses a rich folk-art heritage among its many pockets of indigenous, inland…