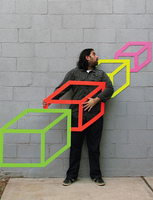 Things aren’t always what they seem with Brooklyn-based artist Aakash Nihalani. By introducing two-dimensional graphics that appear like three-dimensional objects—usually geometric patterns of fluorescent tape—Nihalani toys with our perception of urban spaces. His playful interventions have largely been popularized by street art websites and design blogs. Yet now Nihalani is being commissioned to make work for ad campaigns by major brands such as Lacoste L!ve and Facebook. And although he is currently…