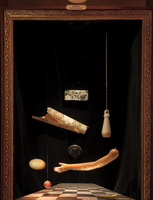 Masumiyet Müzesi (The Museum of Innocence)

The Nobel Prize-winning novelist and essayist Orhan Pamuk has never declared himself to be a visual artist. However, the critical framework of contemporary art—equally accommodating of fact, historiography and fantasy, and the interrelationships between image, object and narrative—is the one most suited for considering his latest venture, the Museum of Innocence, a…