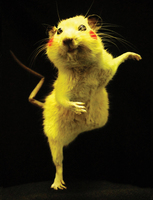 When I spoke to Chim↑Pom member Ryuta Ushiro at the opening of the art group’s first solo show outside of Japan, at Taipei’s Project Fulfill Art Space in March, he joked, “Originally we wanted to form a noise band, but we didn’t have any musical talent, so we became a video art collective instead.” The exhibition of new and well-known works in video…